I recently came across the book My Name is Yoon. It’s about a girl from Korea learning to adjust to her new school as in America as an ESL newcomer. She’s upset about being told to write her name in English and she wants to go home. 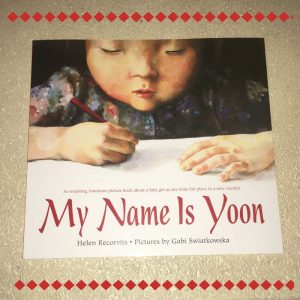 Moving can be hard on kids, especially moving to another country. This book made me think about the ESL newcomers that I’ve taught that had been in the United States for less than a year. Even though they came from different countries, I think they could relate to Yoon. Going to a new school in a new country is scary. Learning a new language can be frustrating. In addition, they miss their family and friends from their home country.

Eventually, Yoon makes a friend and she starts to enjoy her new home. During this transition, Yoon’s teacher was very patient with her which led me to write about several ways teachers can help their newcomers adjust.

When students are just learning English, it’s common for them to go through a silent period. During this period, they won’t talk much, but they listen and absorb the language. Try not to force them to talk too much. It’s overwhelming. They worry about their accent, the grammar, not knowing the right words.

When I first met one of my 5th grade newcomers, she wouldn’t talk to me. She just hid behind her mother and avoided eye contact. As the months went by, she started to talk more. It started with her asking permission to do things like “Can I go to the restroom?” Then, she would volunteer to answer questions in math if it was just a number. Though these are small things, she was gaining confidence with speaking English.

The silent period will end. I saw this student a few years after I had her and I would have never guessed that she only learned English in the 5th grade. We just have to be patient with them and understand that learning a language is process that we can’t rush.

Just because they may not know English, doesn’t mean that they don’t want friends. One of the most beautiful things absit children is how quickly they can make a friend. I’ve seen kids that don’t speak the same language truly develop a friendship. I guess it’s true that communication is mostly nonverbal.

Every morning I had a boy that would talk to my newcomer nonstop as if he understood him. While they ate breakfast, he’d be showing him a book or pictures. They’d laugh and play as if they’d been friends for years. I know this made my newcomer feel special and it was great exposure to the English language.

When teaching students that don’t speak English, I made the mistake of using too many words in my directions. Use short sentences and focus on the key works.

It’s true, a picture says a thousand words. If a student can see what you are trying to teach them, they are more likely to learn it. I should add that this is a great strategy for fluent English speakers as well.

I don’t know why people talk louder when someone doesn’t understand them. When working with a student that’s learning English, you need to speak slowly. Even though it will sound unnatural to you, force yourself to pause between words and phrases.

For newcomers, I don’t think it’s important to focus on their grammar. Language is a means of communicating, and if they are communicating, that’s what’s most important. Eventually, the time will come to work on grammar, but not when they are first starting to learn the language.

Students from other countries add so much value to our classrooms. I love working in a school with students from so many different countries. We must be patient with them and support them as they are learning English.

Hi! My name is Tia and I am an educator and advocate for children. I love reading and I'm passionate about including multicultural literature in the classroom. I love to travel and learn about other cultures. I live under the theme of "extending beyond borders" as I encourage others, as well as myself, to live and learn without limits. It is my hope that you'll find resources for your classroom and inspiration for your personal growth. Read More About Extend Beyond Borders

About Extend Beyond Borders

Extend Beyond Borders is a resource for educators looking for methods to use multicultural literature in the classroom. We also seek to nurture the teachers' personal growth through faith and travel. Here you'll find inspiration to live and learn without limits! Read More…